Home » Laatste Nieuws » The results are in: 8,1 for overall performance IQ-Laboratory

The results are in: 8,1 for overall performance IQ-Laboratory

Over 94% would recommend IQ-Laboratory to a colleague

Proud of their results, IQ-Laboratory shows great improvement in their overall performance, raising their quality score from 7,8 in 2013 to 8,1 in 2015.

IQ-Lab commits itself to customer satisfaction. Twice a year it turns to its customers for feedback. Anonymous participation in the survey by a group of customers highlights the areas in which the

company is successful, but mostly gives IQ-Lab food for thought – and ideas for improvement. The main   goal being continuous improvement, IQ-Lab takes the implementations arisen out of the given feedback in 2013 and checks in to see if, in fact, their improvements did make things better.

The 2015 survey focused on IQ-Laboratory’s reporting and communications. In addition to questions about quality and service, added to the 2015  survey was the option to elaborate on each given answer.  While still being able to maintain their anonymity, specific details gave IQ-Lab the  opportunity to address some of the customer’s feedback.

Filling in the questionnaire on the company’s website at the start of the year, seventeen anonymous customers participated in the 2015 survey. Compared to 2013, results included IQ-Laboratory being given equal or even higher grades in practically all aspects.

Receiving an 8,1 as overall score, IQ-Lab did note some valuable feedback. One respondent indicated reports were difficult to read. In regards to reports being delivered fast enough (7,5) and being thorough (7,9), the average grade together with the client’s comment made for room for improvement. While IQ-Lab made no changes to its way of handling reports, dropping from 8,2 in 2013 to 7,5 in 2015 was a clear indication of changes being necessary. Resulting in a firm goal, IQ-Laboratory will improve elucidation in all reports to better serve customers’ needs.

According to 2015’s results, some of the feedback taken to heart in 2013 resulted in an improvement. Recent commissioning of a communication system made IQ-Laboratory accessible 24/7 and results went up to 7,9 (accessibility by phone), compared to 7,7 in 2013. Another positive result in 2015 was a 94% likeability of customers to recommend IQ-Lab to a friend or colleague.

Despite IQ-Lab offering a variety of services, out of seventeen respondents seven say they are not fully aware of what IQ-Laboratory can provide for them. This was further proven by six respondents who said they had never heard of IQ-Vision, a new method for measuring oil in water (HCTOT/HCMOD) without using TCE. Taking this upon themselves, IQ-Lab strives to better inform all customers and future prospects about their complete range of services. 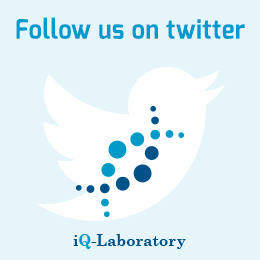